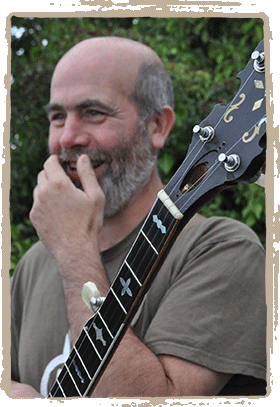 Ian Carmichael’s first love of music came when he first heard the Battlefield Band and the Bothy Band in the 70s and was instantly hooked on the sound of fiddles and pipes. He duly asked to have a fiddle at school, however, was given a French horn! Needless to say after a while that instrument was handed back and a few barren years passed. That probably would have been the end of his musical journey had it not been for the film Bonnie and Clyde and the playing of Earl Scruggs on the sound track.

“It is only now after some years of developing a style of backing traditional music that I have found that the 5-string can be equally at home on the melodies if the natural flow of the instrument is allowed to come through.” — Ian

So the journey began…  Living in the Highlands of Scotland presented problems in finding musicians to impress on him the techniques. Luckily, Inverness did have a music shop that sold a banjo, finger picks, two books and most importantly, records by Earl Scruggs. Other records followed — those of Bill Monroe, Don Reno, Alan Shelton, Bill Keith and many more which were all subsequently worn thin.

His love of this music eventually led to America where he spent a couple of years travelling from festival to festival, meeting and playing with the great bluegrass players from his worn down record collection and generally having a great time indulging in his love of Bluegrass music.

Tugging at his soul however, was his profound love for his own traditional music. On returning to Scotland Ian was present during the vibrant Edinburgh Traditional scene of the early 90s, packed with great musicians and great sessions, allowing him to develop a style of backing for traditional music and gave rise to a short lived, but exciting band featuring Iain Macleod (The House Band, Shooglenifty) on mandolin, Simon Bradley (llan De Cubel) on fiddle, Jazz guitarist and songwriter Sandy Wright and Russel Hunter on piano.

From Edinburgh’s buzzing folk scene, the mid-90s saw Ian move to Ireland, where the same rich musical environment existed and thrived.  Ian has played many festivals both at home and abroad and is well known throughout for his backing of traditional music and playing both Bluegrass and Old time American music.

From Ian’s performing to recording, his album ‘Ten years on’ is a fresh, authentic and vibrant take on the banjo unlike any other.

“The new solo album reflects some of the influences on my playing varying from American fiddle tunes, Scottish and Irish traditional tunes to my own compositions. There’s no straight Bluegrass/Old-time, nor is there any backing banjo, which are both still dear to my heart” — Ian